*This piece originally ran at Baseball Prospectus in May

The concept of pitch tunneling has been around for some time, but the analysis behind the strategy isn’t plentiful. Whether a pitcher works hard to design his arsenal in such a way that he can keep all his options within a tunnel or if it happens mostly out of happy accidents, it’s somewhat unclear if the tunnel affords him any advantages.

You don’t have to dig too deep into baseball Twitter to find some overlay gifs of (what appears to be) pitch tunnels. If you’re not quite sure what tunneling is, observe the gif below:

In 2019, the #Rangers Jordan Lyles's FB and CB had the largest PlatePreRatio, min 10 sequences.
PPR is the perceived distance between two pitches at the commit point ratioed to the true distance at home plate.

FB averages about 95% Magnus efficiency and the CB is closer to 75%. pic.twitter.com/O7ZrYXZrgL

Jordan Lyles threw a four-seam fastball and followed it up with a curveball. The fastball was up in the zone while the curveball hung along the same path until Magnus force (and gravity) pulled the pitch down to the bottom of the zone.

So what might be going on behind the scenes? Let’s say the batter knows Lyles throws his four-seamer and curveball the most, so he’ll build his approach around that. Maybe the hitter thrives on high fastballs, so he decides to sit on that pitch during this at-bat. The hitter makes a habit of not swinging at the first pitch, so he lets the fastball go in for a strike. The hitter knows what to expect with the fastball and sees what he believes to be another one coming out of the same arm slot, along a similar trajectory.

However, Lyles is able to throw his curveball in a way that makes it appear as though it’s a second fastball. Once the curveball reaches or passes the tunnel point (23.8 feet from home) the pitch drops out of the tunnel, and if the hitter is guessing fastball, he’ll likely whiff.

That’s what tunneling hopes to accomplish: keeping the hitter from being able to tell what pitch is coming long enough to force him into guessing more often than he otherwise would. It can also manipulate a hitter into mistiming his swing, which hopefully draws a whiff or some bad contact.

Hitting is more complex than sitting on a single offering, though, and there are other cues aside from where a pitch is at the tunnel point. The average release point spread in 2019, pitch-to-pitch, was about 2.25 inches, which is pretty small, but perhaps slightly distinguishable. A pitcher who has tight release points eliminates the option of identifying a pitch by its arm slot. Of course, a lot of major-league pitchers can do that—sometimes with three or more pitches.

The general thought is that if your release points are tight and you have designed your fastball and secondary pitch(es) to match through the tunnel point, it adds another valid layer of deception. However, varied arm slots can still yield positive results. It’s one thing to know what pitch is coming, but it’s another to be able to pinpoint where it will be located and time it right for solid contact.

So how much does this all really matter? Within this research, the main questions I hope to answer are:

-Are there clear benefits to creating consistent pitch tunnels?

-Do pitchers who excel at tunneling draw more (swinging) strikes?

-Do pitchers who have tighter tunnels demonstrate better control; do they strike out significantly more hitters than they walk?

-Should you build your arsenal around what I’ll call a “Tunneled Attack”?

In an attempt to gain some level of understanding and see if pitchers are actually benefiting from this practice, I decided to review a total of 401 pitchers’ (min. pairing count of 50) tunneling data based upon their whole arsenal in lieu of actually breaking down each pitch pairing each pitcher uses.

I organized the whole group by the average distance between back-to-back pitches at the tunnel point (or PreMax). Then I took samples from the top tier, middle tier, and bottom tier.

From there, I looked at each pitchers’ 2019 FIP, SwStr percent, K/BB percent, and average exit velocity. I chose those metrics because they cover outcomes that are most under the pitcher’s control. Finally, I reviewed their top pitch combinations based on the data provided by Baseball Prospectus’ pitch tunnel pairs to see what they threw in sequence the most.

BP has two foundation-laying articles on tunneling which you can read here and here, but I’ll quickly summarize the three stats that I keyed in on for this research.

Here’s a visual (via BP) showing each point in the pitch process that I’ll cover. 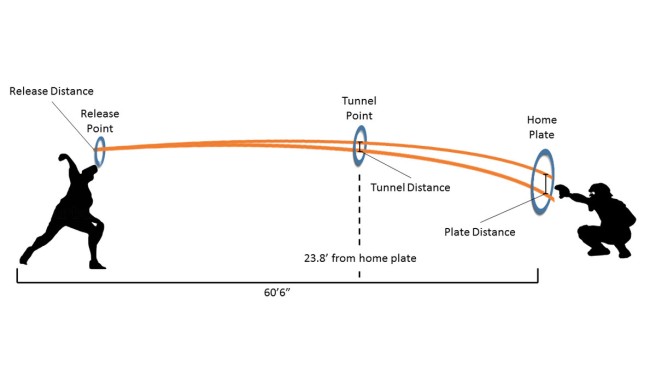 RelDist, or release distance, is the average amount of spacing between each pitch if you superimposed a baseball at each pitch’s average release point location. The gif below shows four of Trevor Bauer’s pitches coming out of their varied arm slots.

You can see from the chart below how the gif lines up with Bauer’s normal release points.

The next stat is the most important, referred to as PreMax (1.55-inch average). It attempts to measure the distance between back-to-back pitches once they’ve reached the tunnel point; the last spot the hitter is able to accurately track a pitch.

This might be the best-tunneled three-pitch sequence I've seen from last season; the #Atheltics Liam Hendriks going slider>curveball>four-seam.

Lastly, I included PlatePreRatio, or the distance between back-to-back pitches at home plate ratioed to how far apart they were at the tunnel point. This stat alludes to how much (late?) movement occurs once the hitter commits to swinging or not.

The #Nats Stephen Strasburg should go heavy with his two-seamer and curve tonight #NLDS.
The #StLCards have a wOBA of .267 (.364 reg season) vs two-seam FBs and .228 (.261 reg season) vs breaking pitches.

The FT and CB 'mirror' at an average of 181-degrees. pic.twitter.com/CnEZLGJUtp

One thing to be aware of before I present the data are pitchers whose pairings mostly consist of consecutive pitch types. Meaning a pitcher who goes fastball to fastball most often may have better tunneling numbers, especially if they don’t vary their locations often enough. I wouldn’t say it heavily skews the data in their favor; in fact, it could make them more predictable and less successful at-bat to at-bat.

To begin, the chart below highlights the pitchers who threw the most pitch pairings in the top 15 percent of our sample. You’ll notice that some top pairings have two sets if they are very close in the count (Syndergaard and deGrom).

Here are the findings specific to the top 15 percent (66 pitchers):

-40 out of 66 (61 percent) had a better-than-average FIP; half of which threw consecutive combinations (FA>FA, SI>SI, etc) most often.

-15 percent (10) of pitchers were better-than-average on all metrics. Three out of those 10 threw consecutive combinations.

The averages for the top-tier group of 66 are as follows:

The most common pitch pairings in our top group were four-seam to four-seam (22), four-seam to slider (18), and sinker to sinker (7).

For the 70 pitchers (17 percent) in our median group, below are the top 10 pitchers based on the number of pairings:

-10 percent (7) of the group had better-than-average metrics for all data. Four of the seven threw consecutive combos.

The averages for the mid-tier group (70) are as follows:

Our bottom tier of pitchers is a group of 66 (16 percent). Below are the 10 who threw the most pitch pairings:

-26 of the 66 (39 percent) pitchers had a better-than-average FIP with 10 (39 percent) of those pitchers throwing consecutive combos.

-9 percent (6) pitchers were better-than-average across all stats. Two of the six (30 percent) threw consecutive combos.

The average for the bottom tier group are as follows:

Most of our sample size regularly used a fastball to fastball pairing, which isn’t surprising since fastballs are used far more than any other pitch. Pairing a slider with the four-seam is the most common non-repeated pairing; it will be interesting to see if there is any significant difference in performance between the two in future research.

To wrap things up, let’s revisit my original questions.

Do pitchers who excel at tunneling draw more (swinging) strikes?
They do, but only by a 1-2 percent margin.

Do pitchers who have tighter tunnels demonstrate better control; do they strike out more hitters than they walk?
Yes, but only about 2 percent separates the top versus middle tier; both tiers have a clear advantage over the bottom tier (3-4 percent more).

Should you build your arsenal around what I’ll call a “Tunneled Attack”?
Not necessarily, but if your designs lend themselves to this ability, it might be worth altering your strategy in terms of how (and/or when) you pair your pitches.

Are there clear benefits to creating consistent pitch tunnels?
We can’t say for sure if pitchers are tunneling on purpose, so we cannot directly attribute success to tunneling. On one hand, if a pitcher designs his pitches in a way that lends itself to tunneling, it’s possible it happens without him realizing it. As of now, there are no data points for measuring intention and we are exercising presumption. However, tunneling is tunneling regardless of your intentions to do so.

It would be fair to say that making your arsenal look the same as long as possible provides a decent advantage versus a pitcher who does not. Of course, we are looking at the entire scope of a pitcher’s offerings. The next step in this process would be to look at individual pitch combinations and break down their effectiveness pitcher to pitcher.

Here's a better look at each. Frozen pitch trail overlay after the jump. #Rangers https://t.co/zPsysOHhEz pic.twitter.com/4E37wTZPeG